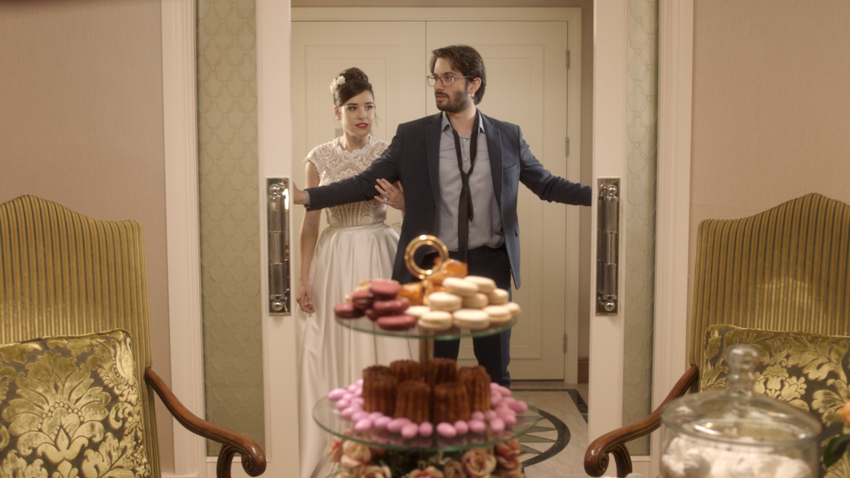 The 2021 Tribeca Festival continues into its second and final week. We’ve continued our march around the world and checked off an even more diverse slate of films. With a new batch, we have a rundown of another dozen films that we thought were worth discussing to season your film palate. The next step for these independently-made films is to win their way to major studio distribution. Some of them have already made it! Keep an eye out on streaming services and in theaters to catch some of these films. Our first film to kick off week two, False Positive, has already received a partnership with Hulu.

Positioning itself as a spiritual successor to “Rosemary’s Baby,” “False Positive” follows a New York couple who finally get pregnant after a well-known doctor artificially inseminates the mother. But as the pregnancy rolls along, she starts to develop suspicions that her husband and doctor have sinister intentions. There’s some decent suspense in the setup, and the performances from Glazer, Theroux, and Brosnan are good. But the atmosphere hardly clicks thanks to mostly uninspired lighting, the horror imagery often confuses rather than scares, and the frequent mirror symbolism gets so hit over the head obvious that it removes a good deal of tension.

See For Me, dir. Randall Okita

A taut home invasion thriller with a twist. Blind house sitter Sophie comes to a remote home to take care of a divorcee’s cat while she’s away on a trip. But when thieves break in to steal a hidden cache of goods, Sophie must use her other four senses and get the help of an army veteran through a unique app on her phone called “See For Me.” But can they dispatch the burglars before her phone battery runs out? This is a well constructed, thrilling experience and especially rewarded by watching with a good sound system. I do hesitate to support the film’s seemingly pro-gun message, and there are some minor plot holes that begin to creep in toward the end. But Skyler Davenport’s impressive lead performance and the skittish pacing keep the audience on the edge of their seats.

A largely unfunny romantic comedy that hints at drama but comes far sort of legitimacy. A recently married Israeli couple heads into their honeymoon suite at the Jerusalem Waldorf Astoria. But they start disagreeing with what to do next right away, and when the bride discovers a ring gifted to the groom by his ex she insists they leave and return it to her in person. Thus is the instigating event for a night where they wander across the city looking for her, self-described as an “all night odyssey.” It’s trying to be like Martin Scorsese’s “After Hours” with a dash of Fellini thrown in, but it gets nowhere near the quality of those filmmakers. Both main characters behave poorly and there’s nobody to sympathize with, and the pettiness of the plot makes the film tedious rather than enjoyable.

Like a tragic opera brought to life in modern China, “Wu Hai” is a dark and depressing ride through the life of a man who is falling apart. Giving up a decent-paying job to open a dinosaur-themed amusement park in the desert, his debts have mounted and his marriage is at a low point. On the side are themes of class difference despite the supposedly classless society of communist China, and the way the cold, unfeeling capitalist economy can destroy both a man and a family. The performances are excellent and the cinematography makes the contrast between the brightly lit cities and the desolate desert really pop. However, the film is mired in misery, and if you’re not in the mood for a film so unabashedly bleak, you may wish to skip it.

A Syrian family flees the civil war of their home, to immigrate to North America and realize the … Canadian dream? That’s right, this feel-good family drama is based on the true story of Syrian refugees who came to Canada and rebuild their lives by making a DIY chocolate factory in their kitchen. A story this unusual just has to be true to believe, right? The drama is a little light and the tension of whether or not the son can balance his dreams of being a doctor with helping the family business isn’t quite enough to carry the whole feature. But this is an uplifting story that keeps your faith in dreams alive.

It’s well known that the founding of the European colonies in the Americas began with violence and exploitation. Framing that as a vague equivalent to modern-day, “499” brings one of the Spanish conquistadors from 500 years ago to current Mexico as he wanders across the country like a ghost. Throughout, he recites brutal passages from real conquistador diaries explaining how they abused the natives, and he hears current primary sources talk about their horrible experiences dealing with the pervasive gang violence. The emotion is there and the idea is interesting, but there’s not enough connective tissue between the two eras to make it work, and its structure makes it too experimental to be truly invested.

>> Check out Tribeca week one roundup <<

How does a band stay together after thirty five years without killing each other? Barely is the answer in “A-ha: The Movie,” a documentary on the history of this unlikely pop sensation. Emerging from obscurity in Norway in the seventies to become worldwide celebrities, the film covers their history and the tensions that still exist within the band. Most casual viewers will only be familiar with their gigantic hit “Take On Me,” a seminal track that will likely fill anybody’s top ten eighties songs list. But this documentary goes into their surprisingly deep catalogue and reveals both the extraordinary talent and divisions the members have gone through. Even for non fans of A-ha, this is a fascinating and inspiring watch.

A fabulous, anger inducing indictment of the National Rifle Association. The film charts the history of the NRA, following its evolution into the right wing political influence machine it’s become today. Founded in the late 1800’s, the NRA originally existed as a club for hunting and sport shooting enthusiasts. But as the civil rights movement emerged, it leaned into conservative and racist politics and spiraled out of control into a monster. Director Judd Ehrlich will likely be attacked by right wingers for liberal bias, but he fairly includes interview subjects like former NRA president David Keene to defend their side. This is a thorough and invigorating documentary that picks up where Michael Moore’s classic “Bowling For Columbine” left off, unfortunately proving that the US has had a gun problem for at least two decades.

A middle aged Danish man reaches his midlife crisis, so he heads out to Norway to live like the ancient Vikings. The only problem is, he’s way underprepared for the task. Along the way he hooks up with an enigmatic survivor of a car accident, and both seek to avoid the police. The film has numerous problems including scenes with superfluous characters, but principally it’s a comedy that can’t decide on a tone. It also delays the reveal of several plot points in sloppy fashion, meaning the audience isn’t sure what is happening for a majority of the film. Just about the only thing going for it is the solid cast and the great cinematography of the Norwegian country.

An Iranian wife and mother loses her husband to execution by the police. Then the state informs her that the actual criminal of the crime in question has confessed. Dealing with this miscarriage of justice forms the dramatic backbone to this effective, but depressing drama. Maryam Moghaddam is stupendous in the central role, conveying quite a good deal of her anguish in her eyes. Like some other Tribeca films, its ending is unsatisfying. It’s intended to leave the audience thinking, but instead contradicts the central morals of the story.

Alabama documentarian Bo McGuire seeks out his squabbling family and tries to examine what went wrong. Combining an impressive trove of home videos from the nineties and aughts with modern interviews and reenactments, Burnham tells the story of how his beloved aunt Sharon gradually cut herself out of the family after both her brother and Bo grew up and came out as homosexual. The drama is there, and the extensive home videos present give a neat window into the past for the story. However, frequent out of place poetry and stylistic filmmaking choices distract from the theme of the movie.

How appropriate and ironic that “How It Ends” was the last film we saw at the 2021 Tribeca Festival. What happens when you have an off the wall idea, access to numerous recognizable actors, but no money? You get this mess, a group of disconnected sketches that I think are meant to be comedic. The plot is that an asteroid is headed toward earth, and we follow a woman wandering through Los Angeles from friend’s house to friend’s house. She’s on her way to a party, simultaneously conversing with her teenage self. This is going to be one of those comedies where you either jive with its sense of humor or absolutely don’t get it. We’re in the latter category.