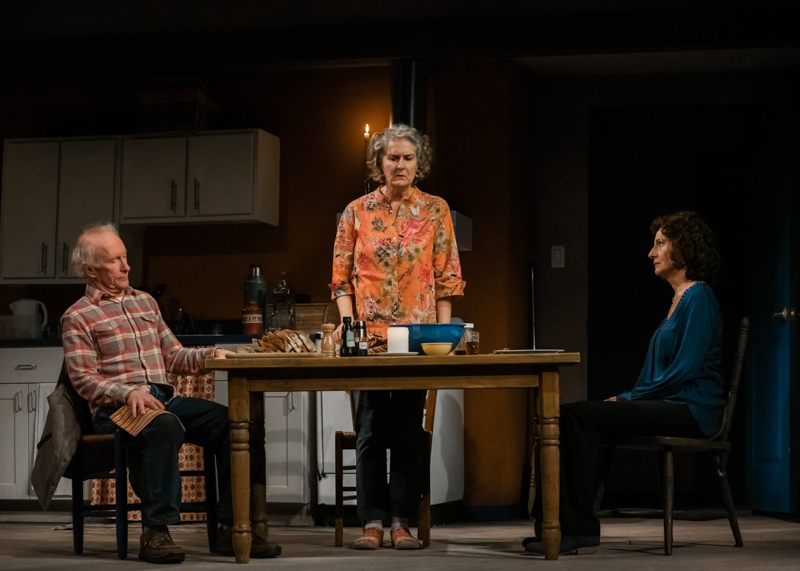 ‘The Children’ Now Playing at the Seattle Rep

The London smash hit play “The Children” is now playing at the Seattle Rep through March 15! Written by award-winning playwright Lucy Kirkwood, “The Children” covers the complicated relationship between two former coworkers at a nuclear plant that recently suffered a terrible accident. Based on the Japanese Fukushima nuclear explosion following a terrific earthquake in 2011, the play covers complex themes and ideas that are sure to get its audience members thinking long after its lights go down.

The story takes place in a cottage on the coast of England, where long-married couple Hazel and Robin reside as retired nuclear physicists. They have resided in this smaller abode since a catastrophic accident at their old work site. However, their lives are further complicated when old co-worker Rose shows up out of the blue, seemingly for a friendly visit with old friends. But old wounds in their relationship resurface, and the real reason for her dropping by becomes clear.

Check out other local entertainment news

Kirkwood’s work premiered in London’s West End back in 2016 to rave reviews, an awestruck audience response, and two Tony Award nominations. After a later tour on Broadway and separate productions in Australia, Toronto, and Chicago, the play comes to the Seattle Repertory Theater for a one-month engagement.

Starring Jeanne Paulsen, R. Hamilton Wright, and Carmen Roman as Hazel, Robin, and Rose respectively, in the only roles of its small cast, it’s evident that the performances needed to be good to carry the drama. And boy, do they hit the nail on the head. Paulsen and Roman weave through Kirkwood’s snappy dialogue with aplomb, yet it all feels off the cuff, like real conversations. Wright and Roman sparkle in their scenes together, former lovers who cut off their affair when the latter left England to travel the world.

The dialogue blends well with Tim Bond’s direction, too. The play begins in the middle of the scene, with Roman’s Rose sporting a bloody nose due to a punch from an unsuspecting Hazel. It’s as the scene continues and the eventual introduction of Robin that we learn more about their relationship with each other, with information doled out slowly.

It’s through this that the audience must eventually ask, did Hazel really punch Rose accidentally? Later, Hazel and Robin’s incorrigible child calls on the phone, and each parent tries to shirk the responsibility of having to talk to her. Are they protecting their child from more sadness, or themselves?

Questions like those pop up throughout the story, like the main theme and title inspiration of what generational obligation these characters have to leave the world better than how they found it. But their answers don’t come easily, and when it’s all over you can’t unequivocally side with anybody because they’re complex characters with nuanced points of view.

Built upon timely topical issues, great performances, solid direction, and a sharp script, this is a production that makes for an eye-opening night out at the theater. “The Children” is playing in the Leo K. Theater at the Seattle Rep next to the Seattle Center through March 15.