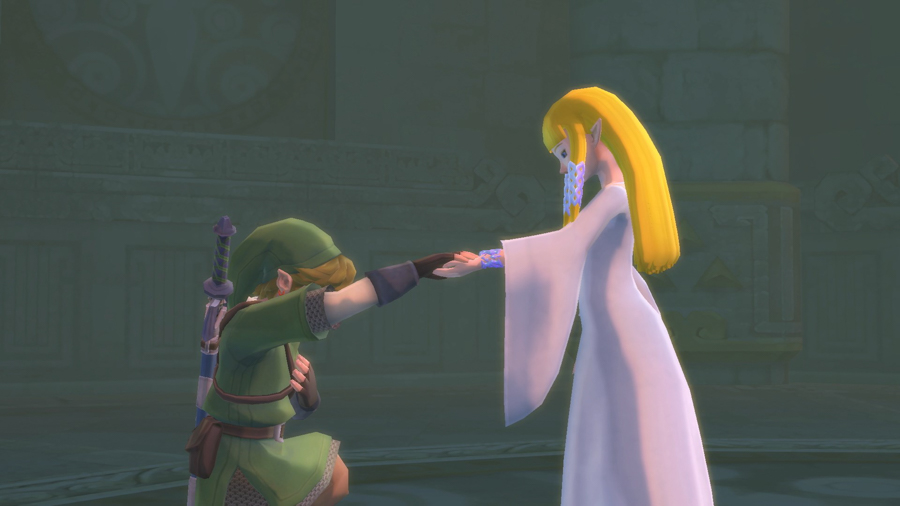 Swing your Zelda sword once more in Skyward Sword HD

Return to the adventure in Nintendo’s newest release for the Switch, “The Legend of Zelda: Skyward Sword HD.” First released on the Wii in 2011, “Skyward Sword HD” is a remaster of this recent classic that improves the original in every way. The game has received a visual facelift thanks to the higher-powered hardware, it runs smoother and quicker, and most refreshing of all even has a new alternative control scheme.

The plot of the game chronologically takes place at the beginning of the long-running series’ timeline. The kingdom of Hyrule exists in a cloud city called Skyloft, where legends are told of a mythical lost expanse of solid ground down below. Young warrior Link passes his flying test to become a knight, but immediately afterward the princess Zelda goes missing. Aided by the mysterious spirit Fi, Link travels to the surface world below to find her, and along the way help the creatures in the forests overcome a new evil presence.

“Skyward Sword HD” was originally released a decade ago to rave reviews, but hasn’t been available to play on current-generation Nintendo systems until now. Before, Nintendo has graced fans with remasters of “The Windwaker,” “Twilight Princess,” and “Link’s Awakening,” so this rerelease is just the latest in a well-appreciated tradition of bringing the classics to modern gamers who may have never experienced these titles before.

True to the franchise’s hallmarks, “Skyward Sword” has the player primarily explore an expansive world and fight monsters along the way. There are dungeons as well to traverse through and solve puzzles, adding variety to the gameplay. But the biggest departure in that regard is the homeworld of Skyloft, a series of cloud islands that the player can fly to and from with their Loftwing, sort of like a giant pet eagle.

The experience is more straightforward than some past “Zelda” titles. It’s not as open-ended as some other entries in the series such as “Breath of the Wild,” but it’s still immersive and there’s plenty to find and do. Fan websites estimate the game takes a minimum of 30 hours to complete, so, despite the linearity to its progression, players are unlikely to be unsatisfied.

The original special feature to “Skyward Sword” was its motion controls, appropriate to the Wii console it was made for. In this update, the motion controls are preserved and improved thanks to the higher sensitivity of the Switch’s joy-cons. Slashing bokoblins never felt so satisfying! But the new feature for players who want a more traditional experience is the addition of button and stick controls.

Instead of physically moving the left and right joy-cons as a shield and sword, Link can equip the shield with the push of a button and slash the sword with the right analog stick. It does take some getting used to, but you’ll be hacking through those mutant wildflowers in no time with ease. Better still, you can switch between the two control schemes at any time, so your play experience can be as customizable as possible.

This HD version has also added amiibo support, little figurine toys of the characters in the game that can augment gameplay. Here, the Zelda amiibo assists in moving from locations easily. Cutscenes are now skippable and character conversations can be sped through quicker than before, making another playthrough for veterans of the Wii original much more palatable. The graphics have also been upscaled and the game looks better than ever. Visually it’s not going to stand up to the ultra-realistic games of today, but the colorful and likable art style gives it a unique identity and appealing look.

“Skyward Sword HD” is a rerelease of a ten-year-old game, but hardcore Zelda fans shouldn’t let that be a deterrent to picking it up. Everything about the original has been improved, so even those who played through it a decade ago will find a refined experience that runs at a consistently smooth 60 frames per second, displays in high definition at 1080p, and has an alternative control scheme if motion control isn’t for you. It’s worth a play if you want another go or experience for the first time! “Skyward Sword HD” is now available exclusively for the Nintendo Switch.

*IttyBittyAtlas was sent a review copy of The Legend of Zelda: Skyward Sword by Nintendo. However, all thoughts and opinions are our own and in no way influenced by compensation or suggestion.