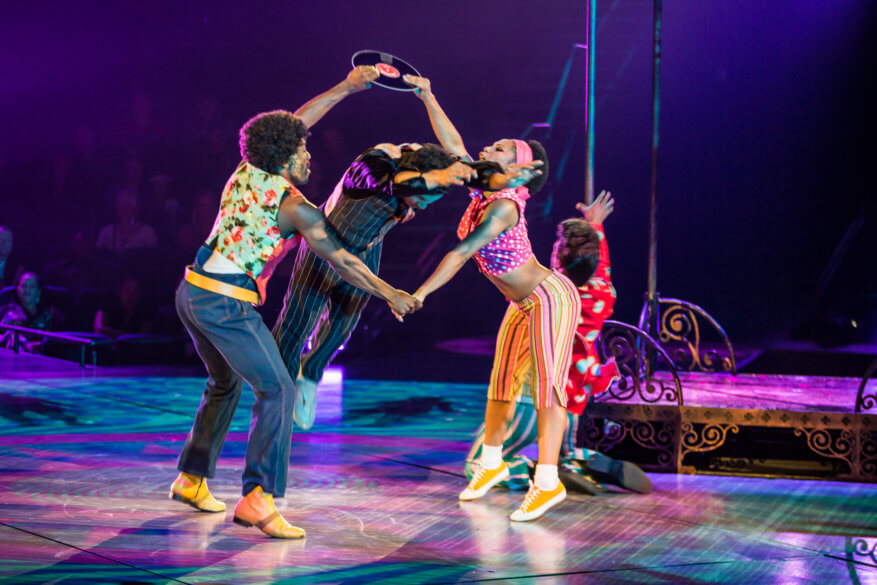 Close your eyes. Imagine glowing lights, retro colors, dancers and beautiful melody to some of the best lyrics of all time. You look up and see a man dressed in a colorful 1960s themed outfit hanging 200 feet from the stage — slowing flowing to the beat — then bam, he’s on the stage shaking his hips to the sound — the sound of The Beatles. The Beatles LOVE by Cirque du Soleil has some of the best choreography ever made. The music is beautifully redeveloped by the stage production to create a unique, yet similar beat that’ll get you tapping your feet from the seats and wanting to throw your hands back and shout.

The performance is choreographed to create a visual of each song with talented performers, who’ll leave picture perfect memories for each time you listen to The Beatles. The seating is situated around the stage in a circle fashion, so that it gives each member of the audience gets a superb view of this magical performance.

Ever since I was a little child I’ve admired The Beatles. Their music was around me from when I was an infant, possibly even before I was born. My parents loved their music and would sit in a circle during family BBQs and do singalongs. This melody was something I’ve always known and admired. It’s a beat that reminds me of endless memories of home, memories of those who now passed on, memories of good times and bad times. The Beatles music holds a special place in my heart, more than just a melody.

A few months ago when my boyfriend and I started discussing the possibility of a trip to Las Vegas I knew that the first thing we must do was see The Beatles LOVE by Cirque du Soleil. My boyfriend has a similar perspective to The Beatles music as I do. He’s always admired The Beatles, and probably knows much about the history of them and each member than some “die-hard” fans of the era.

Many young generations don’t know much about The Beatles and will say they’re “eh” or “too old.” Which is exactly why we need to keep this music alive. It seems much of the music being performed today is situated around sex, dirty love or simpily just doesn’t make sense. I’m so tired of hearing the same 3 lines over and over in a 4 minute song. It seems that it’s hard to find authenticity when it comes to today’s music.

In 2000, George Harrison and his friend Guy, one of Cirque’s founders, started discussions about the possibility of building a Beatles show for Cirque du Soleil. Three years later and several legal talks later with the remaining members of The Beatles (Paul McCartney and Ringo Starr), an agreement was formed and the development of The Beatles LOVE began.

Finally, in 2006, The Beatles LOVE premiered in Las Vegas.

The developers couldn’t have chosen a better place to host the show. The Mirage is simply the best option. The theater houses 6,351 speakers and around 2,000 seats around a central stage.

When I was looking at tickets I was worried about getting the best view in the house. However,  because the theater is set up with seats 360 degrees around the stage, pretty much everyone in the theater gets an amazing view.The theater features 32 digital projectors that form a 100’ wide HD screen that features images and videos throughout the performance.

Many of the popular fictional characters from the Beatles lyrics come alive on stage, including Lucy, Lady Madonna, Mr. Kite, Sgt. Pepper and even Eleanor Rigby. In total, the show has around 65 performers and each one will leave you breathless.

So, what makes The Beatles LOVE show something worth boasting about? Well, it’s simple. The storyline of the show takes you through the history of the Beatles — with broad strokes from the Blitz, the founding and climb into superstardom, their good and bad times, and their break-up in 1970. In about 2 hours the show gives you a deep inside view of the Beatles biography. The finale of the show is a joyous celebration of the Beatles reunion that the show represents — LOVE. Because at the end of the day, no matter how good or bad, All You Need Is LOVE.