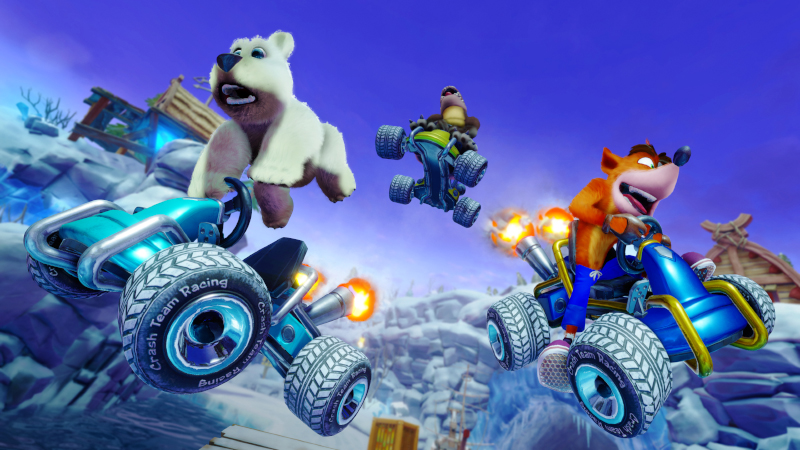 Crash Team Racing Nitro-Fueled is back and better than ever! After the remastering of the original Crash Bandicoot trilogy last year, Activison is giving CTR its own remastering just in time for its 20th Anniversary.

Back in the late 90’s in the wake of the release of Super Mario Kart and Mario Kart 64, the gaming community saw a glut of racing games come their way. Sonic R, Twisted Metal, Diddy Kong Racing, et cetera. But one title in particular stood out, and it was Crash Team Racing, featuring our favorite marsupial, Crash Bandicoot! It was a great hit for the time, yet another installment in the popular Crash series. Now, two decades later, it’s finally getting the modern treatment!

The first aspect to notice is the game looks gorgeous, with much higher resolution graphics and a larger color palette than before. Obviously modern day computers are better than the original PlayStation, so of course it will look better than its predecessor. But it still takes talent to utilize those tools and make a nice looking game, and they succeeded.

Hand in hand with that is the music. Keeping in with the series’ tradition of utilizing tropical countries’ instruments like the xylophone and steel drum, this is a soundtrack that easily stands out from other games and sounds fantastic. Several songs are lovingly redone from the original CTR, and the fast pace to the tracks (both the songs and racecourses) properly motivate you to drive as quick as you can!

Then, once you start playing, you’ll immediately fall in love with the smooth controls. Your car is receptive to even light touches on the analog stick, and all movement feels responsive to your every action. It makes racing super fun since you feel completely in control, with no stiffness or unresponsive button pushes anywhere to be found.

Again, most gamers probably think of the Mario Kart series when it comes to arcade style racing games, but Crash Team Racing Nitro-Fueled separates itself from the pack both with its own roster of characters and a distinctly chaotic playstyle. Cartoonish weaponry items collected during the races, such as bombs, hammers and acid can be against your foes. It’s a fun, neat spin on what you’d expect in this type of game, yet it’s not a given that they’ll work! You must take careful aim to line up your shots, and it truly takes skill to master.

Then there’s the countless unlockables that await your use, dependent on finishing first in races or completing various tasks. It adds inordinate replay value, meaning this title won’t lose your interest that easily!

Well made, challenging, inventive, and fun, Crash Team Racing Nitro-Fueled brings back a nostalgic gaming classic into the modern era in the best way. Pick up a copy, or better yet, seek out the Nitrous Oxide edition, which packs in extra digital content to play around with.