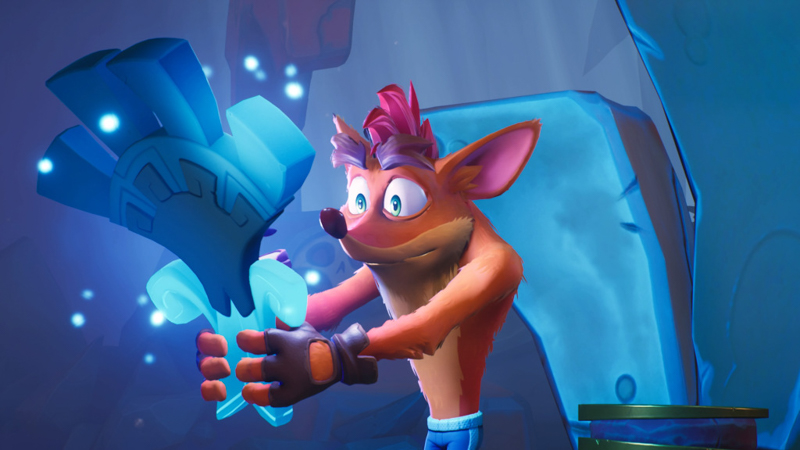 Crash is back for a new adventure in “Crash Bandicoot 4: It’s About Time,” for the Playstation 4 and Xbox One. The title is appropriate after the series saw a decade long hiatus that skipped the previous console generation. But fans of the franchise are welcoming him back with open arms, as this game is both worth the wait for veterans and a perfect introduction for newcomers.

You control Crash or his sister Coco in a humorous story, as they both pursue perennial villain Dr. Neo Cortex. This time, he’s hatched a scheme to travel through time and dimensions to defeat those pesky marsupials. It’s up to you two to collect the Quantum masks and harness their powers to stop him.

This new installment continues what the Crash series always did best: difficult platforming! Fortunately, the game utilizes several new powers for Crash and Coco to take advantage of, courtesy of the Quantum masks. They range from defying gravity to revealing hidden blocks, but our personal favorite was the time stopper. It allows the player to slow down time for a few seconds so you can jump over blocks that, in real-time, only appear for a fraction of a second.

This game should make both hardcore and modern gamers happy with its alternating difficulty settings as well. “Retro Mode” keeps up the old school style of collecting lives, and giving you a game over when you use them up. Meanwhile, Modern Mode gives the player unlimited lives with a simple death counter in the corner of the screen.

Even seasoned gamers might want to give the Modern Mode a try, “Crash 4” is punishingly difficult for even the most experienced players. Whoever you play as your default life bar consists of one hit. Make one mistake and you usually end up dead, and there are plenty of opportunities to mess up here. Fortunately, once you’ve overcome the many urges to throw your controller into the ground, you’ll find a game that frustrates yet intrigues you just enough so that you want to keep on playing. With persistence and a little patience, “Crash 4” is full of fun, challenge, and enjoyability.

Part of what helps it are the aesthetic values, like its pleasing color palette and bouncy music. Additionally, the level themes change with each world you visit, so the level and enemy design have variety. But the real extra draw to the game is its bonus content. Beating the game is hard enough, but even if you think it was too short or easy, there’s at least another playthrough worth of things to do. Try going through the levels again to smash every crate of Wampa fruit, collect all the gems, or make it through the level in three deaths or less.

Additionally, there are bonus levels not required to beat the main story that let you play as other characters off on their own adventures, all of whom have their unique playstyles. Dr. Cortex has a ray gun allowing you to turn enemies into blocks to jump on, Dingodile has a vacuum gun that lets you hover over enemies or large platform gaps, and Tawna can jump off walls.

It’s all in the interest of offering an experience with tons of replay value. Your rewards include dozens of alternate skins for Crash and Coco, additional unlockable levels, time trials, and even a special mirrored version of every level in the game.

“Crash Bandicoot 4” captures the spirit of the old Crash games while offering something new and challenging that any player can enjoy. Just as much fun as the days of old and with tons of extra features to try out, the team at Toys For Bob and Activision deserve a standing ovation for their work.