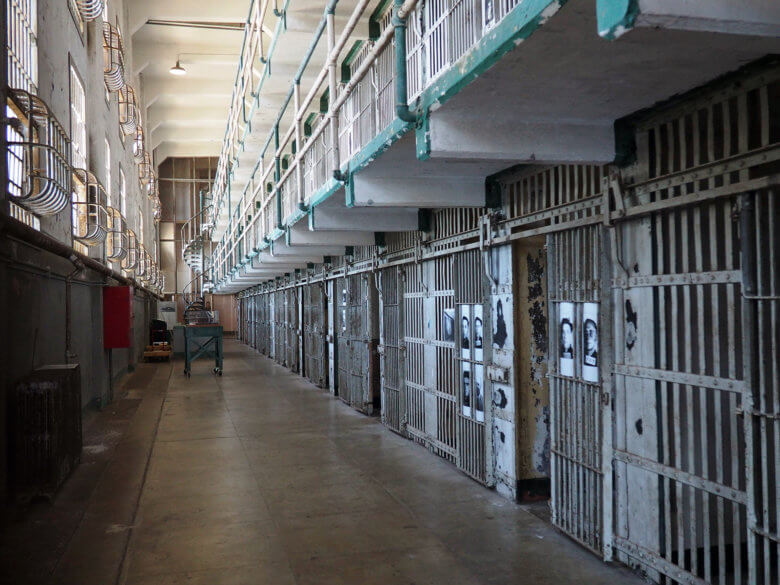 When you think of San Francisco, chances are one of the first images to come to your mind is the infamous island prison, Alcatraz. Built during the Civil War to protect from invasion and converted to a federal penitentiary in the 1930’s, “The Rock” lies in the middle of the bay and is easily visible from the waterfront of the city. In my many visits to the bay, I never had the time to visit it, but that ended this trip, as we had the privilege of seeing it up close.

The cruise-liner Alcatraz Cruises allows visitors an inside peek at The Rock and some great historic offerings too. First off, arriving at least thirty minutes early to your tour boat is important, since lines form and your tickets have to be picked up in person. There’s also a model of the island to examine as you wait. The boat you cruise to the island in docks at Pier 33, easily accessible from the sidewalk and the waterfront train, MUNI. The trip is a comfortable ride and only 15 minutes, and the boat itself has an observation deck giving you spectacular views of the island and the city during the journey. If you didn’t bring layers and it’s too cold out, you can still get a view through the windows down below.

The trip is punctuated with a video presentation explaining the history. The word ‘Alcatraz’ was apparently Spanish for pelican, as that was the dominant bird nesting there when it was named. The island was known to the natives for millennia, but the first Europeans to know of it were the Mexican settlers in the 1800’s. When California came under US control after the Mexican – American War, it became a military garrison to protect from a potential invasion of the west coast.

When the Civil War began it was re-purposed as a military prison due to its strategic location in the middle of the bay. The cold ocean water and treacherous currents made any attempt to swim to the mainland very dangerous, and thus even though only 1.25 miles from a heavily populated area, it was deemed suitable for such a purpose.

This use for military prisoners continued through the Spanish – American War and World War I, until 1934. This was the era of the Depression, and gangsters were being romanticized as Robin Hood type figures in the public eye. In an effort to give an image of being tough on crime, Alcatraz was repurposed as a federal maximum security penitentiary, to hold the worst prisoners the country had to offer.

During its time as a federal penitentiary, some of America’s most notorious criminals were housed in Alcatraz. Guys like Al Capone, “Machine Gun Kelly”, Mickey Cohen, and Robert “Birdman” Stroud. Of course the most famous will be the only ones known to ever escape, Frank Morris and the Anglin Brothers. Their elaborate run was documented in the Clint Eastwood film ‘Escape From Alcatraz,’ and it still sticks in the public imagination today since they were never seen again. Their cells are available for viewing, and include the infamous dummy heads they modeled out of paper mache, and the holes they made in the wall are preserved as well. You can even get a glimpse into the utility corridor they climbed to get to the roof during their escape.

After the escape, it became clear the prison was too old and rickety to be reliable anymore. What’s more, it was deemed too expensive to house prisoners on an island where electricity had to be generated on site and water had to be shipped in, so it was closed in 1963. A brief occupation of the island occurred by protesting Native Americans from 1969 – 1971. The graffiti they painted is left deliberately visible, to remind visitors of the plight of America’s natives, and its role in the history of the island.

As you enter the cell block, there’s a line leading into the original shower room, where you can pick up an audio piece. On it is an hour long audio clip guiding you through the cell block, explaining the geography and history of the prison, with narration by guards and convicts who were on the island during its operation. You have the ability to tour the building without it, but I highly recommend taking it along with you, as it illuminates your understanding of what you are seeing. If you’ve seen the Clint Eastwood movie ‘Escape From Alcatraz,’ or the Michael Bay movie ‘The Rock,’ then you may recognize the locations used in those films.

One of the key features you see on the island is the lighthouse which is still in use, and the oldest in operation on the west coast of the US. Unfortunately you can’t climb up it, but that’s probably for the best as the staircase is probably too narrow and would be too much trouble to traffic guests up and down it. Besides, the view from the ground is beautiful enough!

Obviously there has been tremendous effort to keep the prison safe for tourists to explore, but for the most part it has not been maintained. Paint peels from walls, many cells contain smashed toilets, pieces of walls are crumbling, and several areas stink of urine. The fact that prisoners and guards died there combined with the buildings being abandoned for many years makes for a very creepy ambiance. It’s appropriate for the site, but take that into account if you plan on visiting.

It’s the number one national park attraction in America, so its reputation precedes itself. Of course, you don’t need to take our word for it, since tour tickets typically sell out quickly. When you book your trip, be sure to reserve far in advance. You’ve probably already heard of Alcatraz before you’ve been to San Francisco, so may we humbly suggest you include it in your visit.